As the 2016 holiday season rolls around, we all wonder what is in stock for 2017. Many of the big market watchers like the National Association of Realtors, Inman News, and financial market magazines have already put in their predictions. Everyone is bullish and expecting a hot year for 2017 home sales. NAR is predicting existing-home sales to exceed 6 million in 2017 compared to 5.8 million for this year. 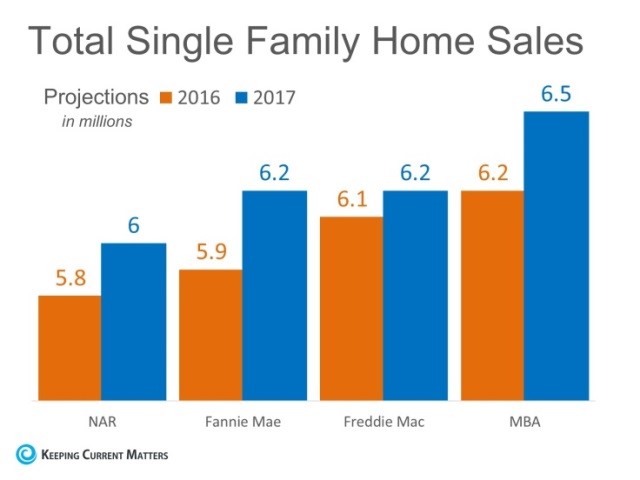 “The top markets for price appreciation likely will be in Seattle, Washington, Portland, Oregon, Denver, Colorado, and Boston”, predicts Eric Fox, vice president of statistical and economic modeling at VeroForecast. These markets’ robust economies have growing populations but a tight supply of homes for sale on the market that will likely lead to some of the largest price increases across the country.” Realtor.org.

As per National Association of Realtors, millennials — those born between the early 1980s and the late 1990s — are expected to buy a first home in 2017, and many have saved enough to buy more than a condo or a starter home.

Mortgage rates are likely to continue to increase throughout 2017. There will not be any easing in inventory, and affordability will still be a challenge in big markets. The potential is there for a large number of first-time buyers to enter the buying market, but they will face new challenges.

Buyers can still be smart and mitigate the risk of rising interest rates in 2017 by looking for lower-priced homes, by putting more money down or in some cases working on the term lengths on a mortgage’s fixed-rate component.

“There’s been plenty written about the move from suburban-style sprawl — marked by McMansions and strip malls — to more dense communities of different housing arrangements, such as town houses, apartments and single-family homes, together in the same neighborhoods. In 2017, look for a new name for it: Surban. Nearly 80% of residential growth will occur in suburban communities over the next 10 years — up from 71% from 2010 to 2015 — compared to just 15% for ‘urban’ areas through 2025.” ~MarketWatch.com