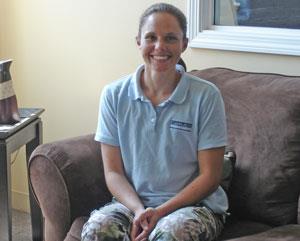 Meet Chanda Gunn, new Director of the Chestnut Street Teen Center in Upper Falls. She is pouring her great talents and focus to revitalize the Center as a clean, safe, and inviting environment for teens. She is full of ideas and has the energy of an Olympic champion. Oh, strike that last part, she IS an Olympic champion. Did I mention she played on the U.S. woman’s national ice hockey team for 10 years? How about that she won the bronze metal in the 2006 Olympic Games? She is still an athlete in her spare time. Chanda was embarrassed to have her picture taken the day I visited because of her 2 black eyes from a rough game of field hockey.

During our meeting, Chanda spoke about her effort to launch cooking classes for the Center. She was careful to note that indeed the kitchen stocks snack foods like Oreos and the like. She was mindful however to emphasize the bigger underlying goal of creating an enthusiasm, if not a passion, for healthy fresh foods prepared in a delicious manner.

Newton Community Service Center has a long history of reaching out to many different sectors of the Newton community. Run by NCSC, the Teen Center on Chestnut Street is grant funded by a Safe Schools Healthy Students Program. The 4 year $6M federal grant is a partnership initiative with a mission “to foster safe, respectful, and drug-free school environments and to promote pro-social skills and healthy childhood development for all Newton children.” Chanda is a walking talking player in the battle to keep our children safe and healthy. Once

again the City of Newton is successful in attract inspirational talent for public service! I am proud to be part of this community. Read more about Chanda at WickedLocal.com/Newton.

As soon as anyone finds out I am in real estate, the first question that pops up is, “How’s the market?”  “Unbelievable,” I will often reply.  Sometimes it is hard to give a more exact answer without asking more questions. There are many ways to elaborate by going in various directions, say for example, national v. local or spring v. summer.  Let’s look at the Newton market for 2010 to date (specifically to July 31, 2010)

Statistics like these are one of the best tools we have for evaluating market sectors. Hope you find them helpful. I’d love to hear your comments.